With Downtown’s expansion and enrichment, many new multi-family developments underway, and the institution of the Innovation Quarter, Winston-Salem is beginning to look like a vibrant, walkable, livable urban center.

The big questions for us are; What’s driving this growth and expansion? Who will be living in these new spaces and places Downtown and across the Greater Winston-Salem area? How does this trend impact Winston’s current residents and businesses? And, why Winston?

DRIVERS, AND WHY WINSTON?

Southern Living ranked Winston-Salem as one of 2021’s “Best Cities On the Rise,” which validates what the city has been trying to achieve since the early 2000s. Factors like universal Internet access, availability of green space, affordability of rental housing, and availability of food takeaway and delivery options, went into the ranking.

“We are unique compared to other North Carolina Cities, considering we have had such an inventory of particularly great factory buildings downtown, like old tobacco factories.” said Walter Farabee, Director of Economic Retention, Expansion, and Real Estate for Greater Winston-Salem, Inc.. Farabee focuses on supporting existing industries with growth strategies, expansion, and success planning and also helps the City identify community assets and new areas for development.

Developers from other markets say that the Winston-Salem market is stronger than that of other, bigger cities because “Winston has options but is not overbuilt. The growth rate is more sustainable than some other cities that are outpacing themselves,” said Farabee. With an average 7.3% population increase between 2014-18, growth is steady and encouraging, while still tenable for residents, businesses, and city infrastructure.

“Downtown In the early 2000s, you saw the early pioneers in Downtown Winston-Salem,” said Farabee. One of these pioneers is Christopher Harrison, founder of The C.A. Harrison Companies, LLC, who is currently working on his second redevelopment project in Winston-Salem, Whitaker Park, with potentially more initiatives on the horizon.

Harrison says the number one driver of growth is “the people of Winston-Salem.” Having lived and done business in many major metropolitan areas across the country, Harrison was initially connected to North Carolina through family roots in Ayden and Rocky Mount. He found Winston-Salem by happenstance, and was drawn in by the spirit of the residents and community leaders who weren’t afraid to embrace progress.

Harrison says overall, his experiences with residents and community leaders alike have been “welcoming, open, and forward-thinking,” creating environments here, which he says have shown up in the pace and type of developments arising around town that are appealing to investors. For instance, Innovation Quarter, is a 4.5MM SF development area that was fully built-out within 7 years of inception, an accomplishment that Harrison says would have been very difficult to achieve in markets like New York, D.C., San Francisco, Dallas, or Chicago.

From a business perspective, developers like Harrison are attracted to the size and scale of Winston, and the people here who can commit to projects and execute them efficiently. This effectiveness spreads through industry grapevines, and the cycle continues.

“The success that people have seen with the LinkIQ Apartments and the Innovation Quarter has spawned some outside investors to say, ‘I should be in the Winston market too,’” said Laura Lee, SVP of Greater Winston-Salem, Inc.’s Economic Development team.

HOW DOES THIS GROWTH TREND IMPACT LIFE IN WINSTON?

At a rate surprising even to developers, the apartments at Link Innovation Quarter and accompanying retail spaces which now feature The Butcher’s Block, Cycle Your City and DeBeen Espresso were 80% filled within months despite opening mid-pandemic. The word got out, and in turn, a new rise of developers and construction projects, specifically multi-family housing, are springing up all across town.

As a result, Downtown has experienced a shift with luxury projects like Plant 64 and Link Apartments IQ. Now, the focus areas are expanding to neighborhoods in between Wake Forest University and Smith Reynolds Airport, namely the redevelopment of the historic RJ Reynolds Tobacco Company manufacturing center at Whitaker Park.

Whitaker Park is a 220-acre site, across from the WFU Football Stadium and LJVM Coliseum recently donated to Winston-Salem and Forsyth County by Reynolds America. The complex, which was built in 1961 and used for 50 years as a tobacco manufacturing campus, is now being redeveloped into a mixed use employment center and residential community. Dynamic projects like Whitaker Park are dramatically revitalizing the remnants of historical buildings into gorgeous, luxe urban living centers, complete with every amenity one could need to live and work in historically less walkable/accessible areas of town.

Harrison is dedicated to redeveloping historical properties for housing, retail, and multi-purpose use, with the help of use tax credits designated for these types of adaptations, or new projects. With a rich landscape of potential sites for redevelopment, given Winston’s historical manufacturing, agricultural, and industrial plant economies, it’s an exciting time for reclaiming the City’s history, and redefining the options for Community and living in Winston.

Projects like Whitaker Park are working to change food deserts and bring new options to overlooked areas. Because of the retail options set to accompany these new multi-tenant residences, the livability for all residents in different areas of the city will benefit and improve from these developments. For Whitaker Park, they are aiming to include fast-casual and quick-service food options, a bank, and package delivery services. In a very short period of time, there will be close to 1,000 jobs added to the neighborhood, plus with more than 300 apartment units, there is a lot of opportunity to explore further enterprise.

At the same time, concentrated efforts have gone into connecting the South Side and Downtown areas, all the way to the breweries and new apartment complexes north of 7th St. Heading south of Bailey Park and Long Branch Trail, Old Salem’s revitalized housing and Pedestrian Strollway will see even more development in the next two years. Winston’s connectivity is strengthened by 20 miles of connected greenways and parks joining boutique bars, shops, and eateries like District 924 that are revitalizing unused spaces.

With all of this growth and culture-bending going on behind the scenes and into building foundations, curiosity begs the question: Who will live here? And what will they be doing?

Farabee says the City’s new strategy for economic development includes many target industries, which features a mix of traditional target industries, and also new, burgeoning industry centers such as hydro-technology and start-ups. “Winston-Salem has been known for many years as a top location for start-ups, ” Farabee said, “because we have a very supportive entrepreneurial ecosystem.”

Lee says the city is actively recruiting more businesses and entrepreneurial leaders in these industries, through targeted, dynamic accelerator initiatives such as Nordic Amplify (a new, international business development program for Healthcare/Life Science), and Forsyth Tech’s Mazie S. Woodruff Aviation Technology Lab (new 53,000 SF  Aerospace/Aviation Center at Smith Reynolds Airport). These programmes not only establish Winston-Salem as industry launching pads and diversify the local workforce, but have also “kept communication lines open about foreign direct investment in a time when you couldn’t access foreign countries,” said Lee. Several other accelerator programs for entrepreneurs are open for applications and many resources are available here.

As a result of the expansive focus on diversity of industry and economic development, Downtown and the surrounding areas are attracting young professionals, students and graduate students, first time job seekers. The population also includes empty nesters who are looking to downsize and live more centrally now that these blossoming housing developments have provided more, flexible living options - like LinkIQ and Whitaker Park, which provide big city vibes without big city prices.

As Harrison puts it, “What you’re seeing is a paradigm shift in America in and of itself.” This paradigm shift sets up industry, residents, and real estate developers to bring “the new cool” to mid-size markets like Winston.

“More diverse culture, diversity of thought, is really the only way we want to grow. Our elected officials are keeping that top of mind,” Lee and Farabee conferred.

Winston is currently involved in a study with Harvard University, The Future of Work, in which Winston is being used as a case study for what mid-sized cities can do from an educational and policy perspective to encourage sustainable, diverse growth. 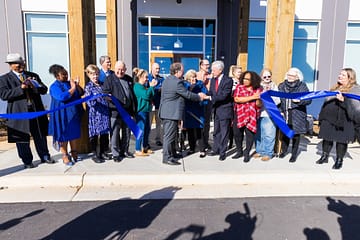 The Northwest NC Food Bank has a beautiful new headquarters in Whitaker Park – the space was unveiled for the annual “Farm to Fourth” celebration that became “Farm to Second Harvest” this year. Some of Read more…