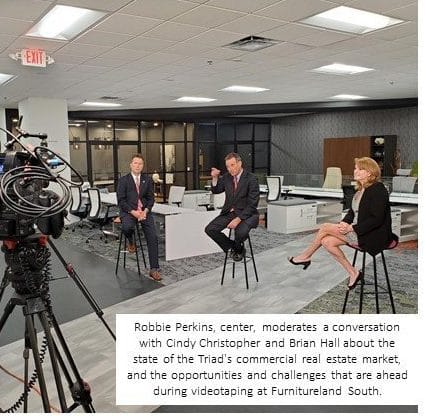 Congratulations to Cindy Christopher who was recognized for being a trailblazer for women in the commercial real estate industry. She was honored to be chosen as Triad Business Journal's top deal maker in the Retail Leases category at the Commercial Real Estate Awards.

Cindy was also delighted to be part of the Triad Business Journal's CRE awards panel discussion alongside Robbie Perkins and Brian Hall. Furnitureland Contract provided their beautiful showroom and did a fantastic job on production.

Here is an excellent excerpt on their discussion where Cindy Christopher provides insight into the downtown market and innovation quarter’s growth potential at the Triad Business Journal commercial real estate round table discussion.

Perkins: As an outsider coming from Greensboro to Winston Salem, I find what has been accomplished in Winston-Salem’s downtown to be fantastic. Why has it happened and where do you see it going in the next five years?

Christopher: The driving force of that has been Innovation Quarter, which is a public private venture between the city, Wake Forest and Wexford, the developer, where they've taken these Reynolds tobacco warehouse buildings, and used tax credits and repurposed them. And so now you have down there office, you have life sciences, you have labs. But what's really been fun is the last couple of years is to see the retail and restaurant develop. So with Bailey Power Plant, the old power plant for RJ Reynolds tobacco, you have multiple restaurants, you have more office, and now Front Street Capital has now started bringing to market, in 2020, their new building, which is 75,000 square feet of offices. The Variable went there, and I just finished a restaurant deal, 600 Degrees, which will be on the ground floor, and it's actually going to open right at the end of the year.

Perkins: Give us an idea about the magnitude of square footage and total investment in the Innovation Quarter.

Christopher: There's like 263 acres there, so they have different phases. They're in phase one, going into phase 2, and I think with Atrium, which they're completing that merger (with Wake Forest Baptist, you'll see more activity and more development coming. They're going to begin with an eye center, The Eye Institute,  starting a new building down there, and then hopefully you'll see more to follow. So that's going to be a real positive for Winston-Salem downtown but also Innovation Quarter.

Perkins: What the leadership did that was really wise is they had a long term plan, and they invested infrastructure dollars in putting in place that whole intersection at 52 and Business 40, and a lake there, and so that it creates a real amenity. But that didn't happen quickly. That plan has been in place for at least 10 or 15 years.

Christopher: It has. You'll start seeing more development go south of I-40. Now that they've completed 40, that's going to help hugely just with coming into town seeing the first phase to the north, and then starting to see these buildings, and they're going to try to recruit corporate headquarters going down to the south, but also you've seen a big growth in residential. I worked with Chris Harrison probably seven eight years ago to plan Plant 64, which was like 277 apartments and we did some commercial space with it. And it seemed like it was before its time, but since then, you've had Goler and now Clay Grubb (of Grubb Properties) is on his third residential project downtown.

Perkins: Who's living in downtown?

Christopher: You have students but also people like us deciding to maybe not have a larger home and have an apartment downtown. You have a lot of workers with the hospital, with Wake Forest, with Novant, that are living there. There's a big component of affordable housing. So, you have school teachers or other residents living there, so it's been exciting to see how many projects are going on. There's a new one under construction now, right off I-40 near the ballpark. And Clay Grubb is also doing his third, at what I call the old GMAC building, 500 West Fifth, where Don Flow has also consolidated his operations downtown. So you've really had a lot of synergy downtown, and then to see the restaurants, follow up, has been fun.

Perkins: The city of Winston-Salem has executed a plan. This just didn't happen. This was a concerted effort by the community to reinvest in the downtown and make it an exciting place. It's great to see that it is paying off. Talk about office downtown. I know that with some of the corporate moves, there is a fair amount of office vacancy.

Christopher: Office has been struggling, and we have quite a bit of vacancy in downtown. However, over the last couple months, I have had more activity. I know of four law firms that are actively looking for space right now and some other deals. We're still trying to recruit new companies, new jobs, to Winston-Salem. I just had lunch with Mark Owens at the chamber and (Mayor) Allen Joines, the mayor, and Laura Lee, the new economic development person, and there's a trend to try to get companies (from larger cities) to come to our area where it's very livable. Also, some technology companies that are small, and then we can be competitive to have them hopefully to grow. So I think it's going to get better.

The Northwest NC Food Bank has a beautiful new headquarters in Whitaker Park – the space was unveiled for the annual “Farm to Fourth” celebration that became “Farm to Second Harvest” this year. Some of Read more…